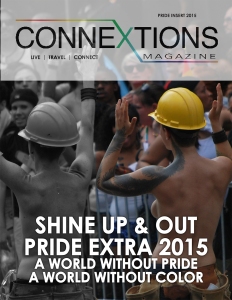 In an effort to celebrate the US Supreme Court’s approval of Marriage Equality, Connextions Magazine, the Travel & Lifestyle Magazine for the LGBTQ Traveler, has created a very special SHINE UP & OUT PRIDE Extra 2015. This Photo Editorial answers the following questions:

The original photo essay was published on the Summer & Pride Issue #18: SHINE UP & OUT, which was created prior to the SCOTUS ruling on Marriage Equality. This photo editorial aims to show what a colorless world would be like. Our world is not black and white, most issues are not black and white. “Equality” should be a black and white issue – we either HAVE EQUALITY or WE DO NOT HAVE EQUALITY – that’s it. It really is that simple!

Although we now have Marriage Equality, there are several states and counties that still DO NOT provide us with full EQUALITY. The LGBTQ community is not treated equally, by laws and people, the same way that our heterosexual brothers and sisters are treated. So, if we take the topic of EQUALITY as a black and white issue, anyone with any degree of intelligence can clearly see how UNequal we are and this is why we have “PRIDE” Festivals across the globe. 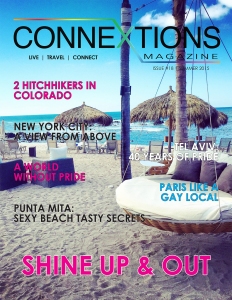 But what would a world without PRIDE look like? It would look unfinished.

It would be a world full of deception, fears, depression, and hostility because PRIDE means acceptance, means to be happy to be who you are, you are no longer in hiding, no longer afraid someone can out you, you are now sharing your true self with others and therefore, part of the world and part of the human race.

Send us your PRIDE pics so we can add them to our very special Pride Issue!